The  windlass   machinery  is  combined  with  the  forward  mooring  winch  as  one  unit. The  main  winch  consists  of  a  double  reduction  gearing  arrangement  to  produce  a  ;large  torque.

The  wind  lass  is  arranged  on  a  further  reduction  arrangement.The   windlass  part  consists  of  a  solid  cable  lifter  wheel combined  with  the  brake  wheel keyed  to  a  shaft  properly  supported  on  two  bearings  with  its  clutch  arrangement. The  clutch  connects  the  cable  lifter to   driving  gear  when  the  anchor  has  to  be  hauled  up. 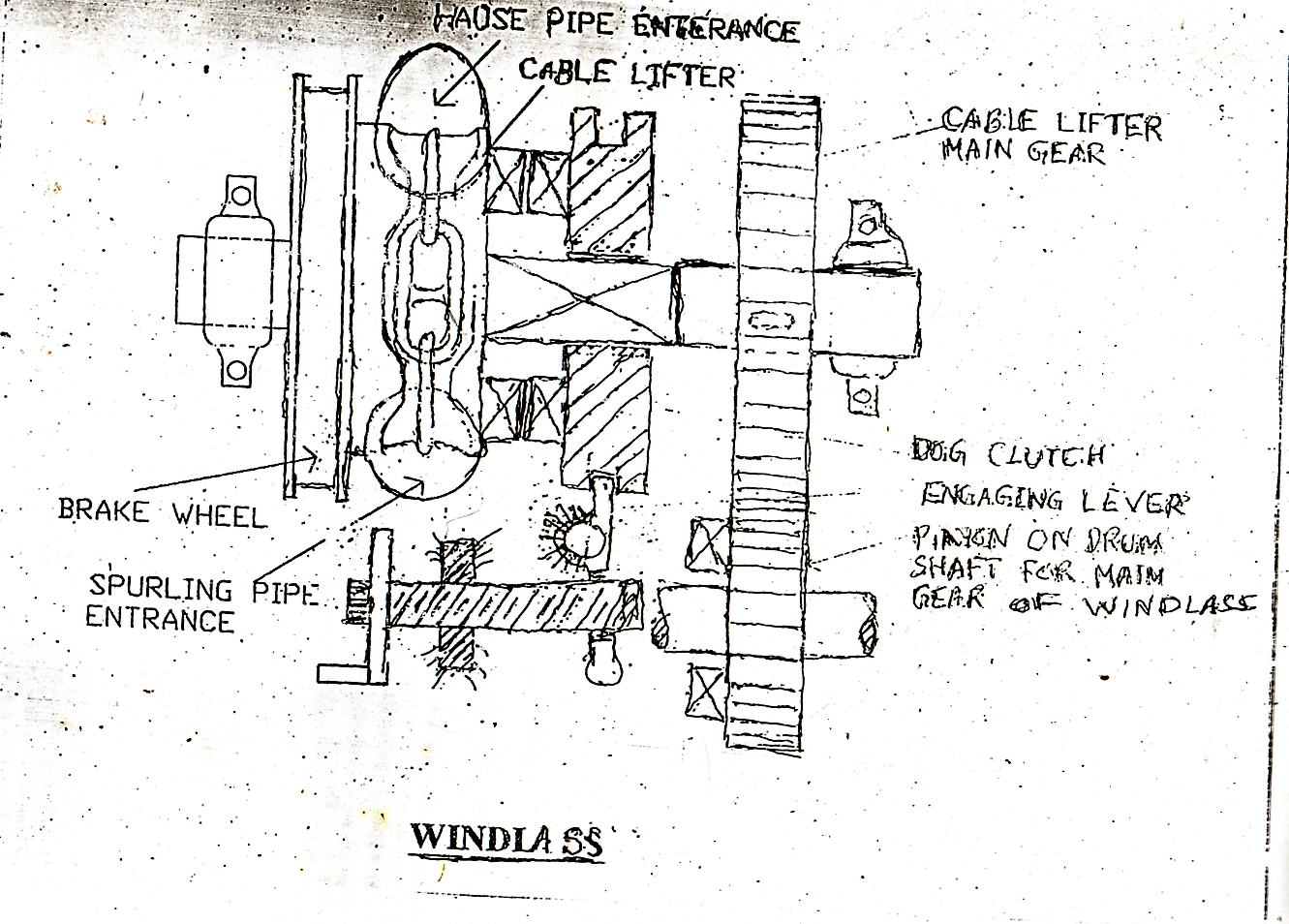 The  windlass  including  mooring  winch machinery  is  common  for  both  hydraulically  operated   or  electrically  operated equipment .  In  the  case  of  the   electrically  operated  windlass cum  mooring  winch the  driving  motor  is  a  two  speed  motor  controlled  by  a  suitable  pole  changing  device.  The  lower  speed  gives  higher  torque  suitable  for  the  initial  breaking  of  the  anchor  from  the  ground  when  more  force  is  required and  the  design  torque  provided  for  this  condition  is 150% of  the  full continuous  torque  for  a  period  of  at least  30  minutes. All three phase  induction  motors  are  steady  speed  motors  with  a  small variation of  load  torque.  The  speed  is  fairly  high  since  the  frequency  is  high  and  to  reduce  the  operating  speed  electrically  is  inconvenient  since  it  involves  increasing  the  number of  pairs of  poles.  To  avoid  this   a  double  reduction  gear  box  with  oil  lubricated  machine  cut  gears  has  to  be  incorporated  in  this  system. As per  class  rules  an  over load  slip  clutch  has  also  to  be  included  for  safety,  since  electrical  safety cut outs  are  time  based and may  not  cut  out  when  overload  happens  suddenly. For  these  reasons  the  electrically  operated  windlass  and  mooring  winch   has  its  limitations  and  are  used  only  on  small ships.

The  electrically  operated  windlass is  given  under 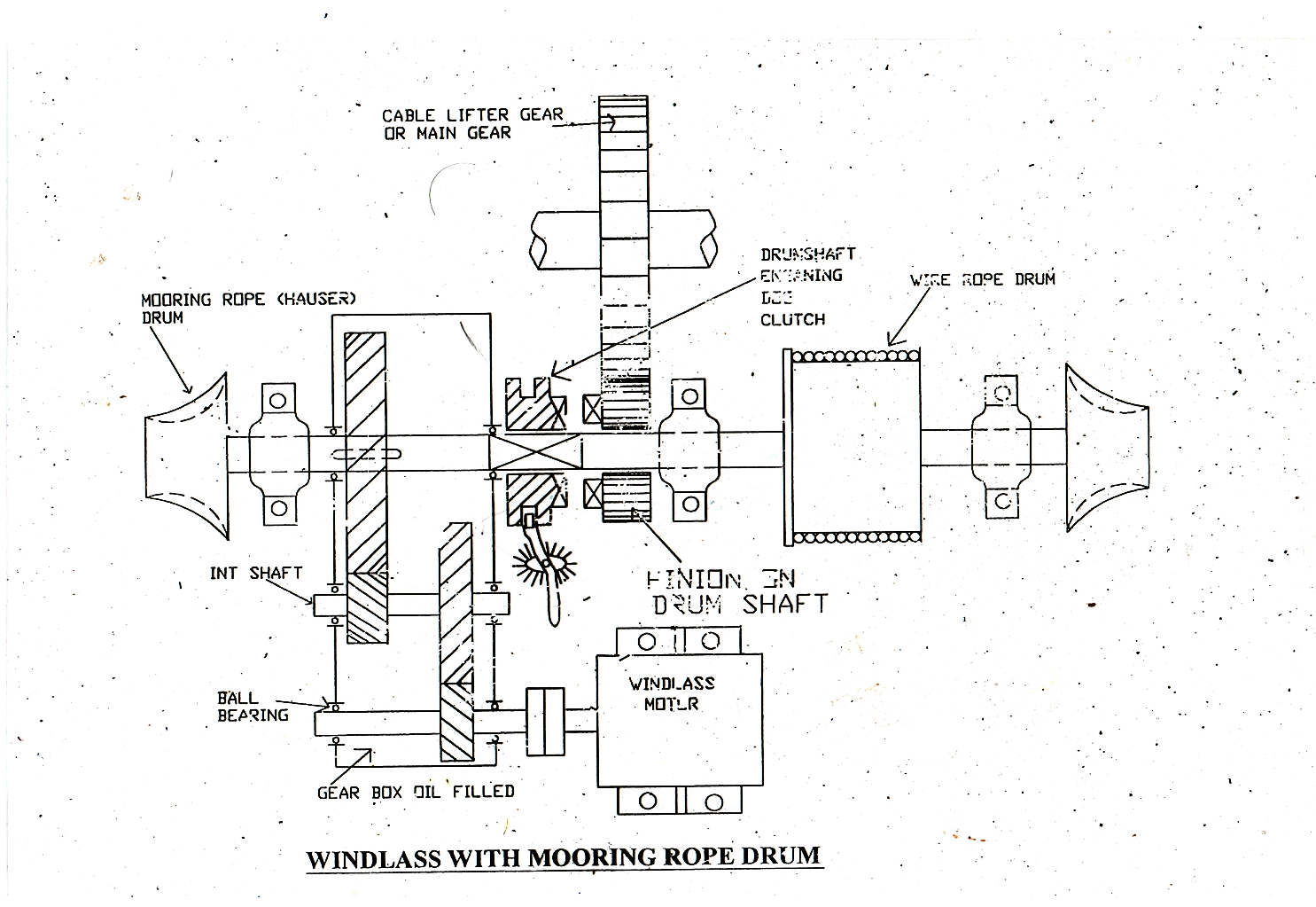 The hydraulically  operated windlass has  larger  torque capacities  because the  hydraulic  motor  can  operate  at  very  low  speeds  even  at  5 to 10 rpm, there by  building a  very  high  torque.  The  torque –speed  characteristics  of  hydraulic  system  is  much  better  and  flexible  than  electrical  systems. Their  comparison  is  shown  in  the  sketch  given  under 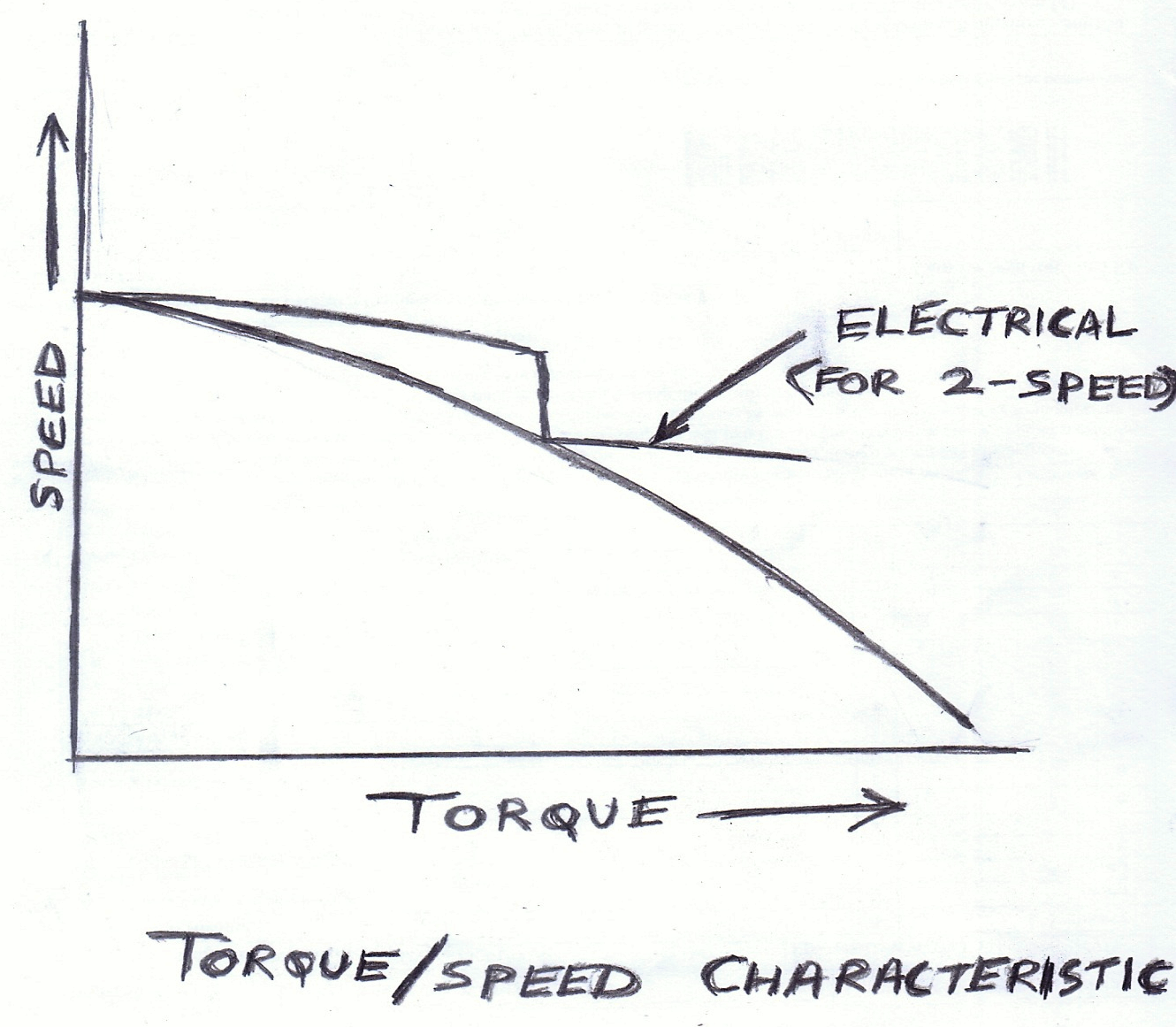 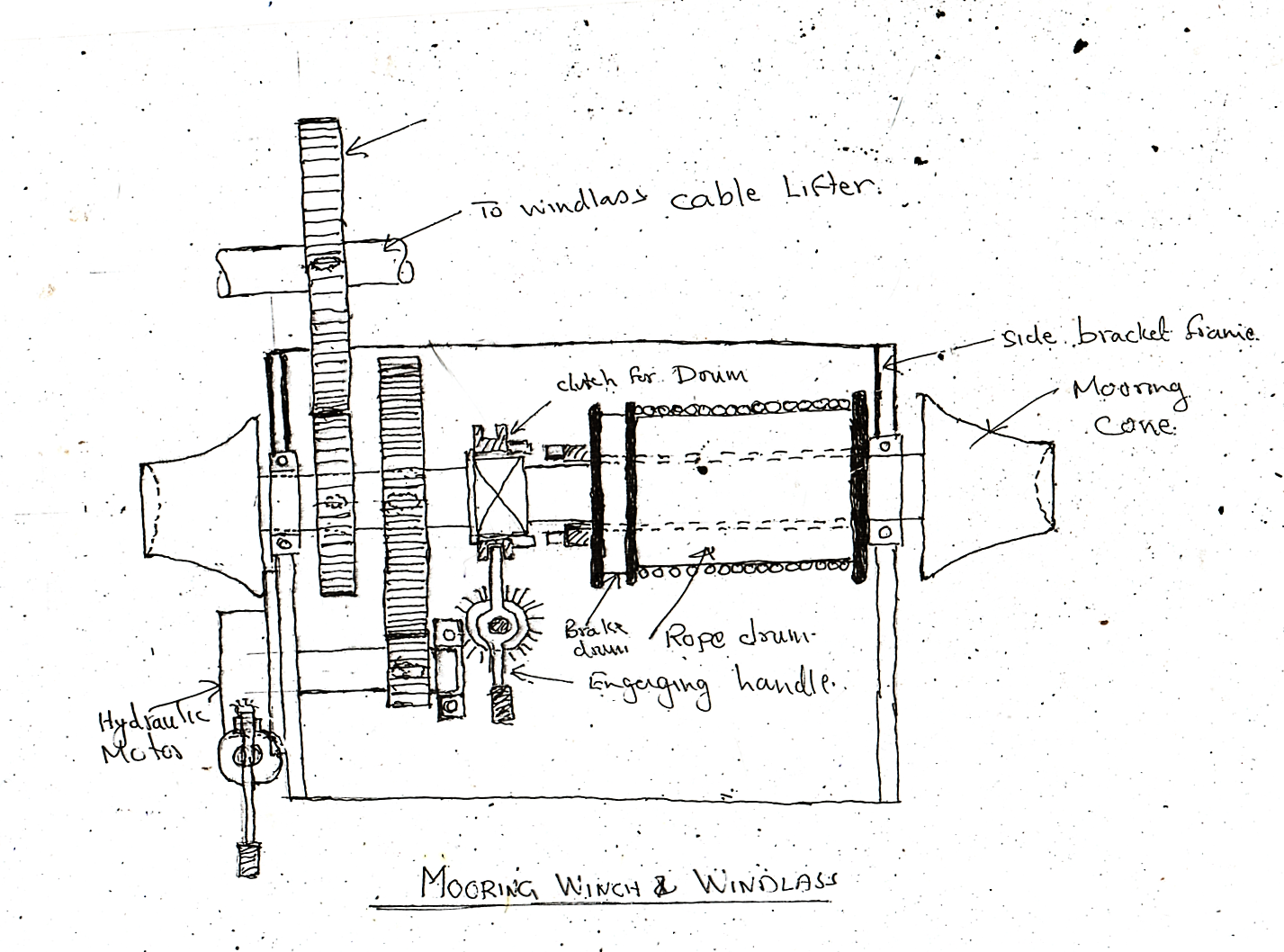 The  hydraulic  system  schematic  sketch below is  illustrated  as    The main  components  of  this  system  consists  of  the  following: 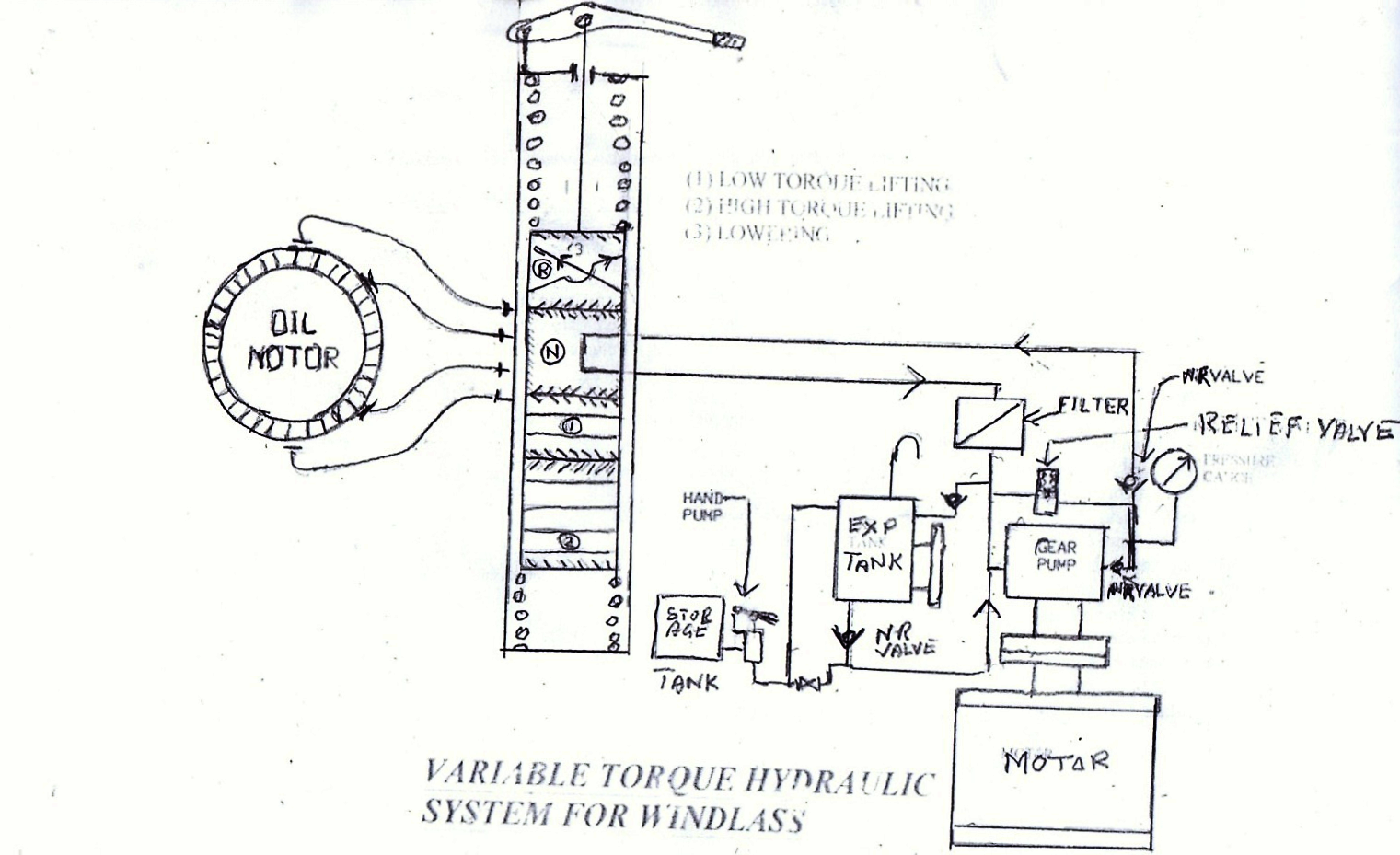 The  rotor is  mounted  on a strong  roller bearing  and  also  carries  an  oil  seal  which  prevents leakage  of  oil  during  operation. 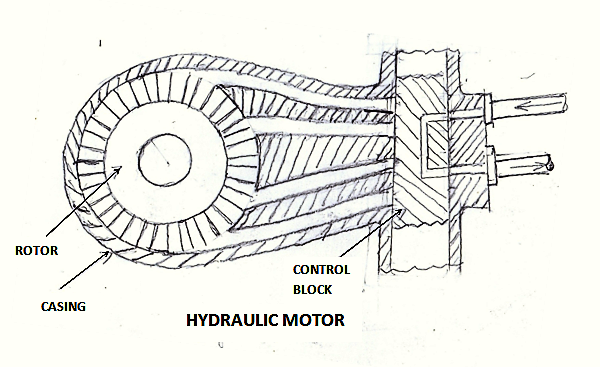 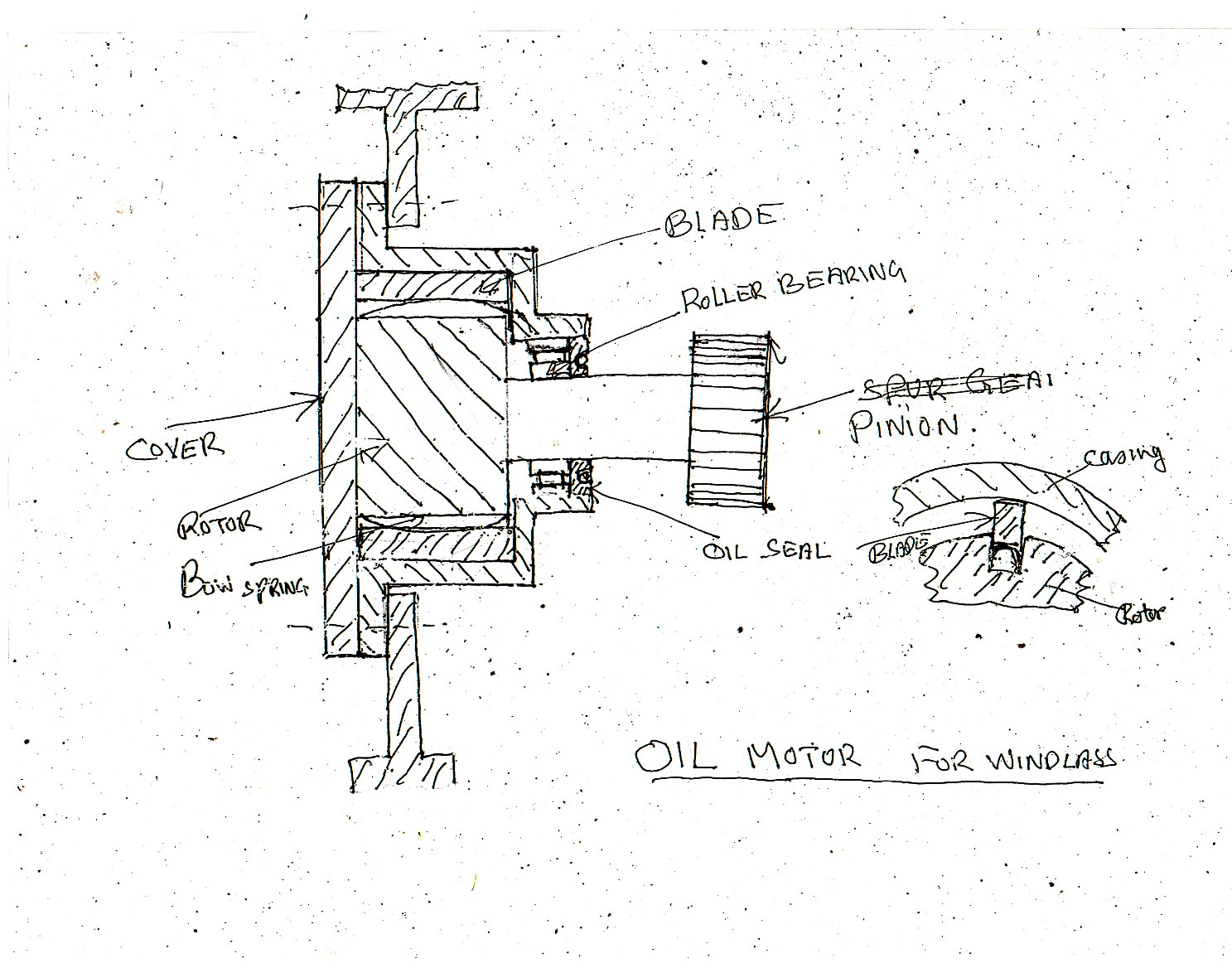 The  electric  motor  driving  the  gear pump  is  a three phase  double  squirrel  cage  motor  with  high  slip  capability  combined  with  higher  rotor current  capacity  because  of  the  two  layers  (radially) of  copper  bars   embedded in  the  iron   rotor. The  sketch  of  this rotor  is  reproduced  as  under.

7.1.2 Windlass is to have one cable lifter for each anchor required to be kept ready for use. The cable lifter is normally to be connected to the driving shaft by release coupling and provided with brake.

7.1.3 For each chain cable, a chain stopper is normally to be arranged between the windlass and hawse pipe. The chain cables are to reach the hawse pipe through the cable lifter only.

7.1.4 Electrically driven windlasses are to have a torque limiting device(slip clutch). Electric motors are to comply with the requirements of Pt.4, Ch.8.

7.1.5 The windlass is to be capable of exerting, for a period of 30 minutes, a continuous duty pull corresponding to the grade of chain cable, as follows :-

Where dc is the chain diameter [mm]. The mean hoisting speed is not to be less than 9 [m]/min.

The windlass is to be also capable of exerting, for a period of not less than 2 minutes, a pull of not less than 1.5 times the continuous duty pull. The speed in this period can be lower. The above criteria do not require both anchors to be raised or lowered simultaneously on windlass fitted with two cable lifters.

The chain stoppers and their attachments are to withstand a pull of 80 per cent of the tabular breaking strength of the chain without any permanent deformation of the stressed parts. The chain stoppers are to be so designed that additional bending of the individual link does not occur and the links are evenly supported.

7.1.7 Attention is to be paid to stress concentrations in keyways and other stress raisers and also to dynamic effects due to sudden starting or stopping of the prime mover or anchor chain.

One thought on “Ship Windlass”