>> The  modern ship’s anchor  is  called  ‘Stock-less  Bower  anchor’ and  is  developed  from  the  primitive “ stock  Anchor”. Both these  anchors  are  illustrated  as  under. 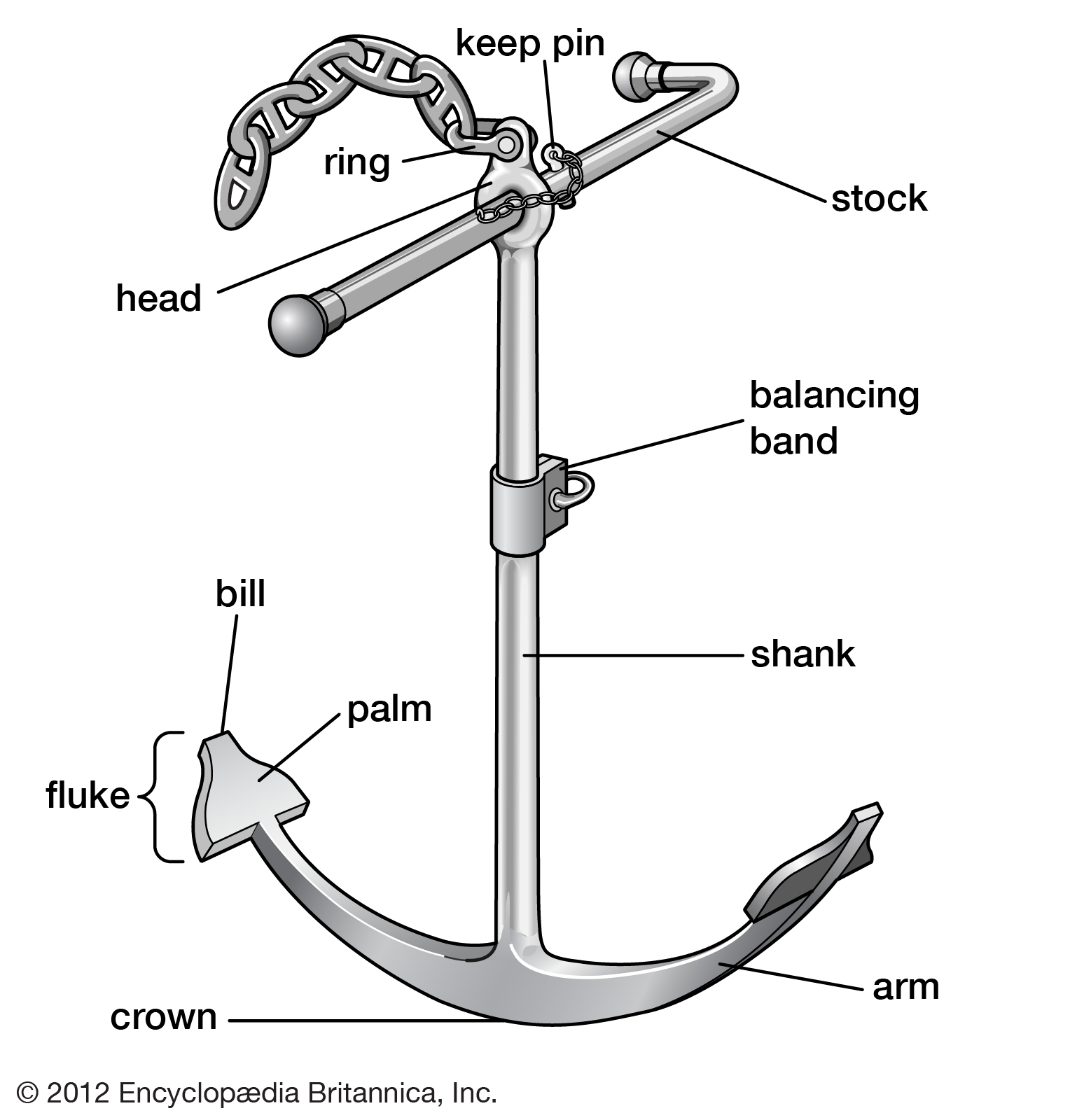 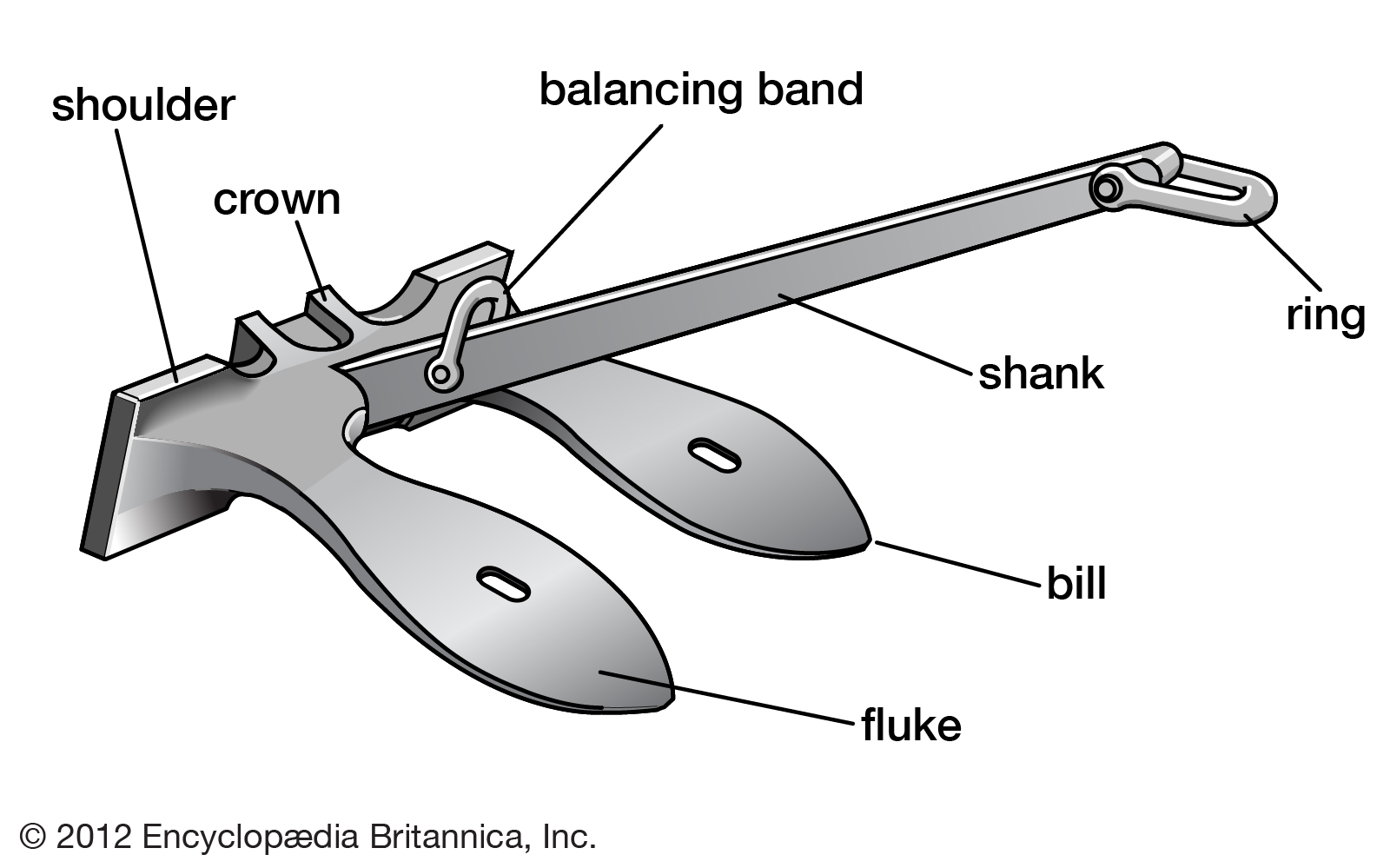 Forces  acting on  the  ship  whilst  riding  anchor:- 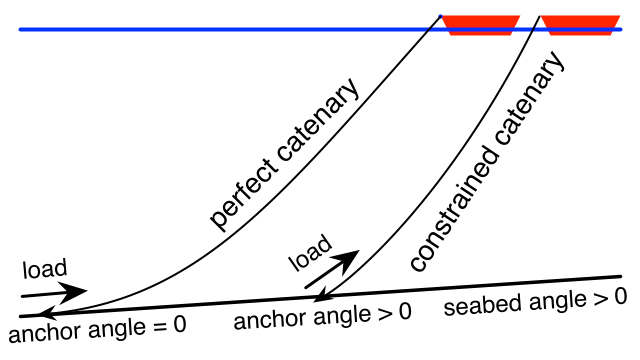 1. The  head (crown) with  shoulder and the  flukes  folded  inwards

>> When the anchor is released at the time of anchoring it drops by gravity taking along with it the chain. The anchor head being curved and not flat causes the anchor to fall on either side with the shaft resting on the ground and taking a posture like a plough entering the ground and thus gets fixed in the earth or ground. The details of the forces acting on the ship when riding anchor are given in the sketch shown as under. 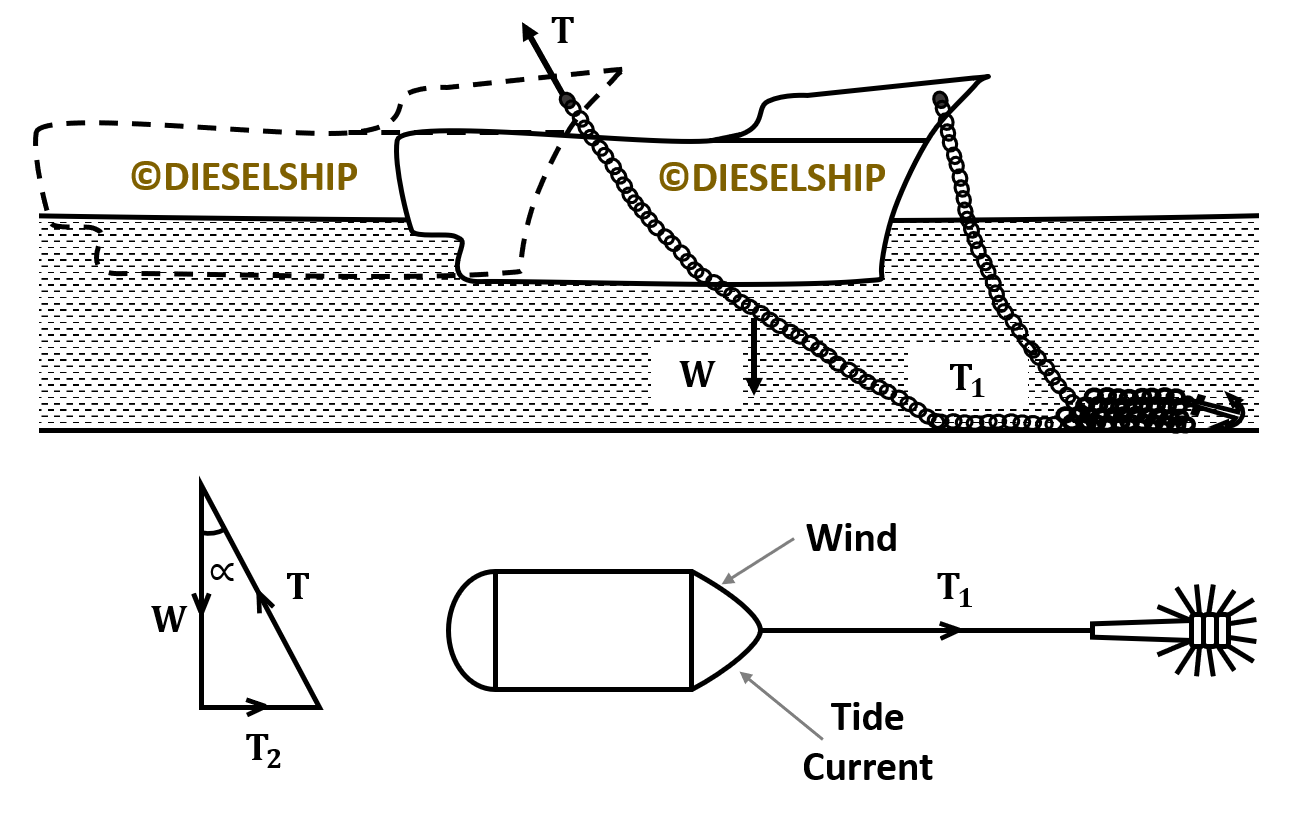 >> When a medium sized ship anchors about 5 shackles are paid out. Assuming that the ship has anchored at slack water, there may be only 2 shackles forming the catenary.

A shackle is a unit of length and equal to 15 fathoms or 90 feet and is the standard length of a chain .

>> Where W is the vertical angle . For all angles below 450  ‘W’ will be greater than T1 and hence the ship has a reserve force or strength of the weight of the anchor and one chain shackle in this condition.

>> Now if for some reason the weather deteriorates and both the current and wind force increase the remaining shackle will be lifted out of the water and further deterioration in the weather may make the catenary degenerate into a straight line . This is the limiting condition when the vertical angle exceeds 450 and the horizontal tension becomes larger than the weight of the anchor leading to the condition of anchor dragging.

>> During anchor stations some captains ask their C/O’s “How is the anchor leading.”. the C/O’s reply is normally 5 to 10 degrees to the vertical at slack water gives confidence to the captain that there is sufficient chain in the water to take care of stronger currents.

>> Modern  anchors  are  subjected  to  non-destructive  testing  and  the  procedure  is  as  follows.

Can a old anchor from scrap yard be used as replacement anchor?

Classification  rules  on Anchors and Chains

>> The Anchor & Anchoring equipment is therefore not designed to hold a ship off fully exposed coasts in rough weather or to stop a ship which is moving or drifting. In this condition the loads on the anchoring equipment increase to such an extent that its components may be damaged or lost due to the high energy forces generated particularly in large ships.

>> A good  holding  ground  as  defined  by  the  above  stated requirements  are;

>> A  good  anchoring  ground is  normally  marked  on  the  chart  by  an  anchor  symbol  on hydro-graphic  charts giving  details  of  port  anchorages.

>> To  find  the  equipment  details  for anchors  and  chains as  given  in  the  rigging  tables  of  the  classification  rules,  the  following  procedure  is  adopted.

The equipment number, EN, on which the requirements of equipment are based is to be calculated as follows :-

A = area [m2] in profile view of the hull, superstructures and houses above the summer load waterline, which is within the Rule length of the vessel. Houses of breadth less than B/4 are to be disregarded.

H = effective height, [m], from the summer load waterline to the top of the uppermost deckhouse, to be measured as follows:

hi = height [m] on the centre line of each tier of houses having a breadth greater than B/4. For lowest tier, hi is to be measured at centre line from upper deck, or from a notional deck line where there is a local discontinuity in the uppers deck.

>> In the calculation of H and A, sheer and trim are to be ignored.

>> Parts of windscreens or bulwarks which are more than 1.5[m] in height are to be regarded as parts of houses when determining H and A. The height of the hatch coamings and that of any deck cargo, such as containers, may be disregarded.

>> ‘K’ is a factor depending upon the type of vessel and service notation as given below: For fishing vessels,

K = 1.00 for vessels of Unrestricted Service.

>> Having found the equipment numeral,  the details regarding sizes and quality may be obtained from the rigging tables provided in these regulations.

>> For information and guidance a specimen of the Rigging table is reproduced as under. 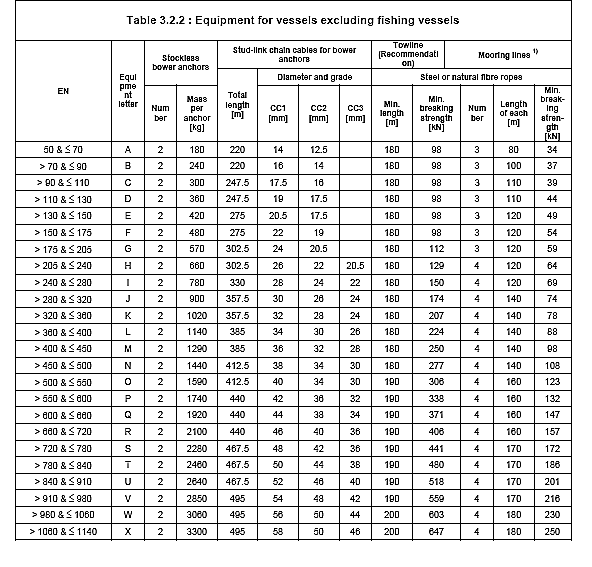 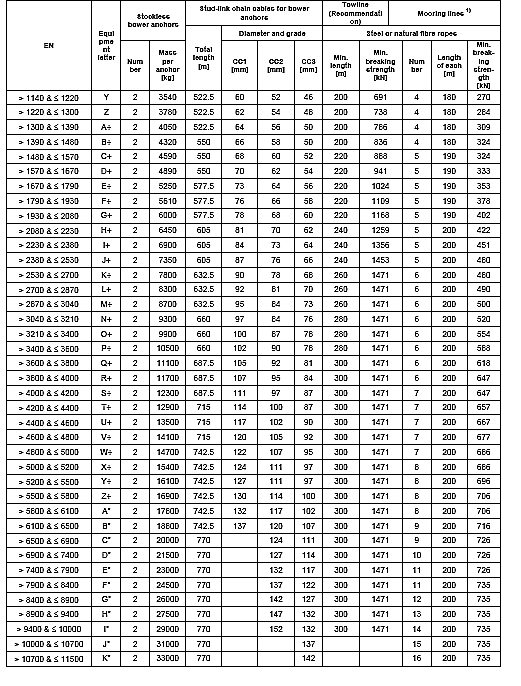 How to use rigging table?

>> As an example let us consider the group EN 2380 to EN2530. The corresponding equipment letter is J+, each anchor weighs 7.35 tons and the total length of chains provided is 605 meters.

>> The chains always come in lengths of a unit “shackle” , where 1 shackle is 15 fathoms or 90 feet. The shackle is an English unit and all chain manufacturers make chains in one shackle length. The rule length is therefore increased to the nearest full shackle length to meet the rule requirement .

>> For ease of operation the total length of 605 meters will be divided into two equal halves and the nearest minimum full chain length in shackles per chain is given by 605/2*3.7878/90=12.73 shackles. The nearest full shackle length is 13 shackles. Hence each anchor will be connected to 13 shackle lengths of chain to make up for the rule length of chain.

>> As per the classification rules the ship has to be provided one spare shackle of chain. This spare shackle is therefore connected to one of the chains as that is the most convenient way of stowing the spare chain length. If it is kept in the forecastle stores, it will occupy all the space and make it difficult to stow spare mooring ropes and wires.

>> Hence on most ships either the port or starboard chain is longer by one shackle and that extra length is accounted for the spare shackle length. The shackle length is connected to the next shackle length by a ‘Kenter “ shackle which is specially designed to fit in the cable lifter link slots, and also be capable of being opened and joined.

The link is called a stud link and is different from an ordinary chain link. 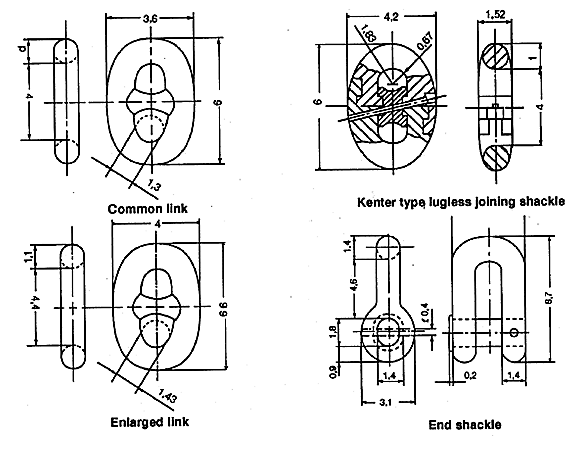 >> The sketch(Anchor chain links) of two stud links , one a common link and the other an enlarged link, a kenter shackle and an ordinary shackle are reproduced here to understand their uses.

>> The ordinary shackle is used to join the anchor at the anchor end and the chain in the chain locker connecting it to the bulkhead stiffener. The kenter shackle connects one chain length to another chain length and the stud links are of two standards one common size and the other enlarged link for larger vessels..

>> The chain links are graded according to the carbon content in the steel and corresponding heat treatment and the three standards of link material are graded as CC1, CC2, and CC3. The three standards are graded as follows :
CC1———— low strength.
CC2———–medium strength.
CC3———–high strength.
>> Owners are free to choose any grade of steel from the given three qualities. Having selected a grade the same grade is to be used throughout the chain length for the full life span of the ship, since the cable lifter slots are made as per the diameter according to the grade selected.

>> The chains are stowed in two separate chain wells placed in the chain locker forming part of the forepeak tank. The chain is led out of the locker through a pipe with a bell mouth at the inner end of the spurling pipe.

>> This bell mouthing is provided to enable the chain to move in a rotating fashion as it is being stowed while heaving up the anchor. This rotating motion enables the chain to be stowed properly without forming a heap.

>> The chain passes out of the spurling pipe wraps on the cable lifter and enters the hawse pipe where it is connected to the anchor.

Anchor end of the chain

Bitter end of the anchor chain

>> The inboard end of a ship anchoring cable which is secured in the chain locker by the clench pin is called the bitter end of anchor cable.

>> It is to be provided with suitable means such that, in case of emergency, the chain cable may be easily slipped to sea from an accessible position outside the chain cable locker. Where the mechanism for slipping the chain cable to sea penetrates the chain locker bulkhead, this penetration is to be made watertight.

>> Bitter end should be capable of holding the chain weight, but it should be constructed so that, it will break incase of emergency so it doesn’t damage the ship structure. As mentioned above, there has to be a provision outside the chain locker which will release the bitter end of the chain in case of any emergency and the anchor and chain is to be released to the sea.

>> Alternatively the cable end connection may be accepted where it has been designed and constructed to a recognised National or International Standard.

>>  The cable clench supporting structure is to be adequately stiffened in accordance with the breaking strength of the fastening provided. 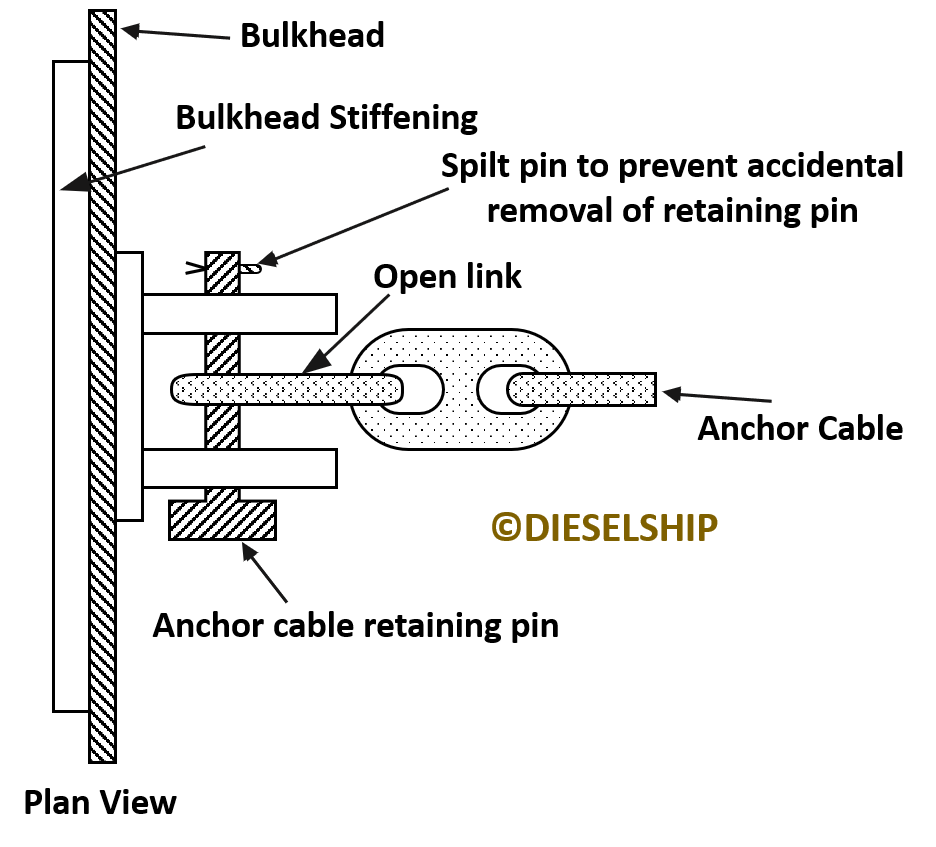