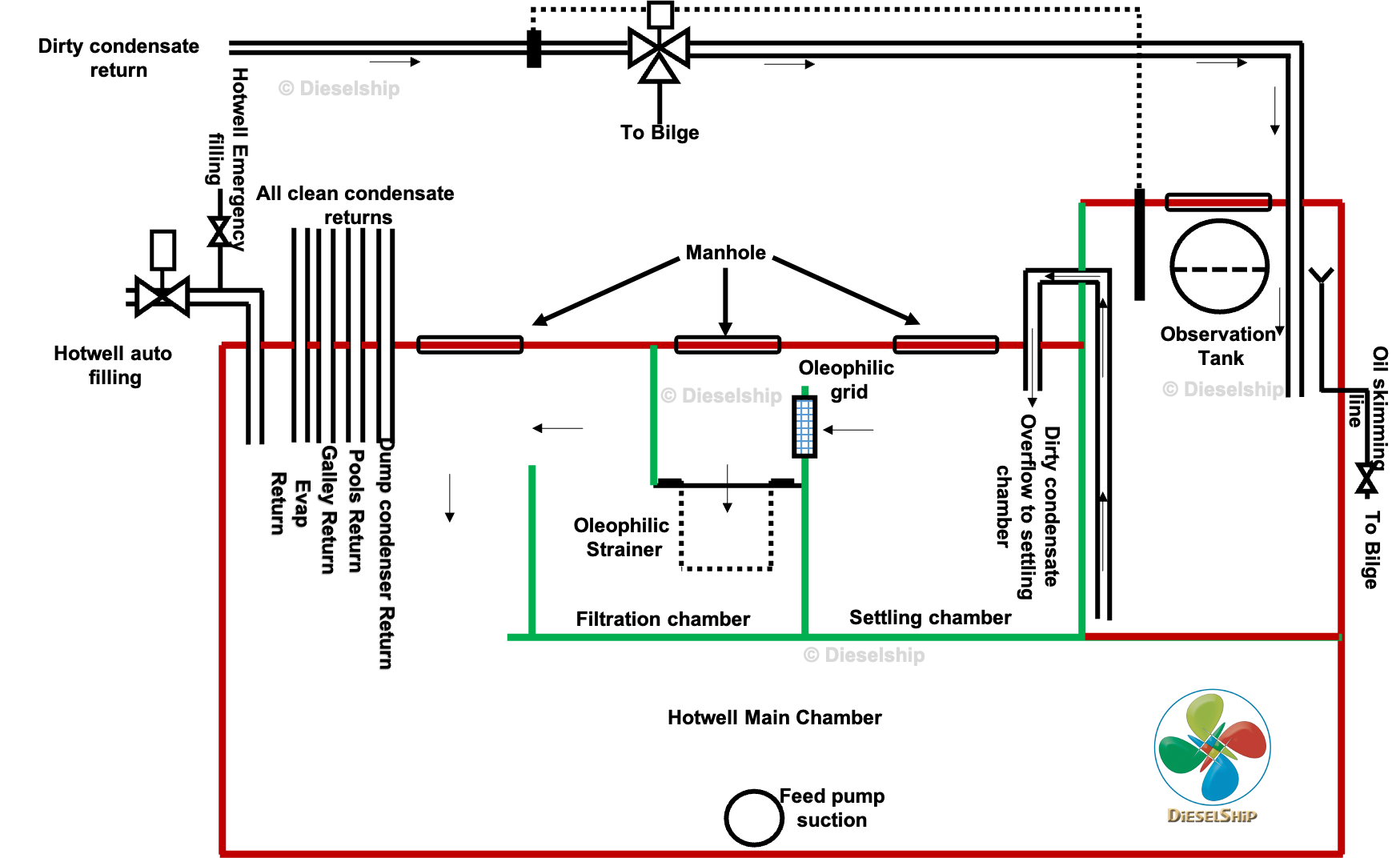 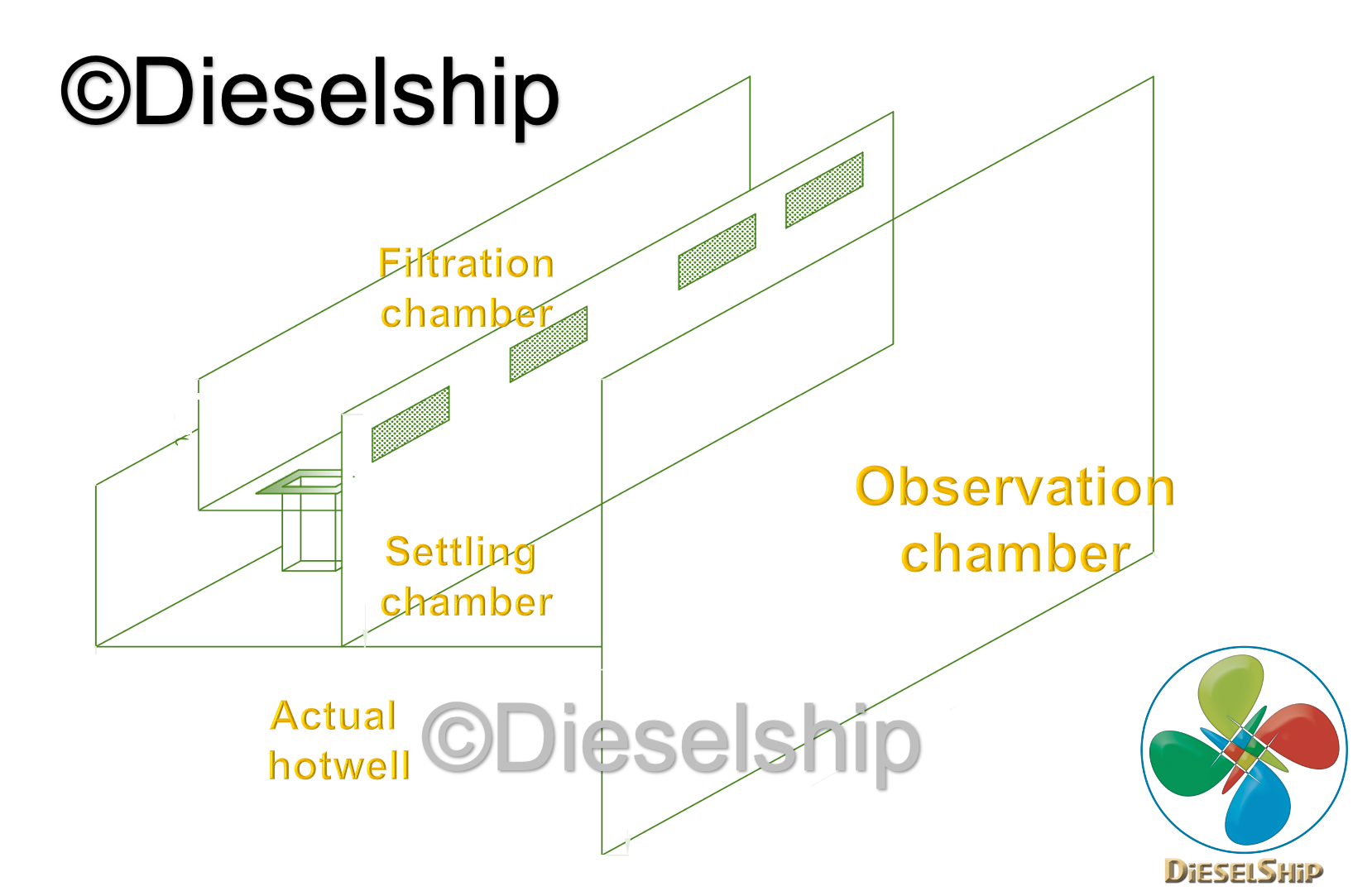 Hello, You have reached this page most probably looking out for some information about hotell / cascade tank. I have been searching online for many months to repair a leaking hotwell in one of the ships i served. I wanted the internal drawing of the Hotwell, tried in many sources including the yard where the ship was built, but with No luck.

Finally i ended up opening my ship’s hotwell made measurements and learnt its operation. I am sharing my drawings and animation with you here.

I am not going to talk about hotwell functions here, just the construction and working of it.

>> Hotwell is made of steel thickness about 10 mm plate. Obviously due to fire restrictions and class regulation it cant be stainless or other material.

>> Let me explain the parts and mountings of the cascade tank below.

>> The tank itself is called an “hotwell”, Reason for naming it so is explained in detail later. The term cascade is often used because the dirty condensate is filtered through cascading method in different chambers.

>> Dirty condensate doesn’t readily have any contamination, however, due to failure of any heating coils oil may reach the system which then contaminates the whole system, to avoid such situation dirty condensate is treated in cascading process.

>> The dirty condensate is installed with oil sensing probe in the main manifold (which manifolds all return into one header) and connects to the hotwell. This oil sensing probe (usually of capacitance type) monitors the return condensate, incase of any oil particles it will trigger an alarm and turn the diverter 3-way valve to the bilge, hence the contaminated water is diverted to bilge safeguarding the feed system from contamination.

>> The alarm alerts the watch keeping engineer who can check if the oily content is factual! trust me most of the times i have seen this sensor going Koo-Koo (Word typically used in cruise ships, to describe malfunctioning or kind of acting crazy or being confused) and creating false alarm.

>> If the alarm is not false, then the watch keeping engineer will go about shutting down the steam to all dirty heaters and investigating the root cause to identify the culprit and isolate.

>> Yes, at some instances i have seen oil in observation tank but the sensor doesn’t pick this up! it is always a good watch keeping practice to monitor this sight glass as part of engine room rounds.

>> The observation tank is also installed with a skimming line, which is pointing upwards with a funneled mouth. The mouth stays on the brink of the water level and the pipe leading outside the hotwell goes to a bilge well and installed with a valve.

>> Incase of any oil is seen in the sight glass this valve can be opened to skim the oil from the top layer of observation compartment.

>> The observation chamber overflows into the next chamber which is called as “Settling chamber”.

>> The next compartment on the hotwell tank or cascade tank is settling chamber, This compartment is provided to settle down any heavier particles such as solids and other impurities.

>> Here, the water is allowed to settle down. This chamber is isolated from the fluid movement from the rest of the compartments to ensure the settling process is not disturbed allowing it to naturally settle down.

>> The water from this compartment overflows from top via a oleophilic grid strainer.

>> Oleophilic means – having a strong affinity for oils rather than water.

>> The strainer made of such material is installed here which absorbs the oil and also prevents solid particles from moving in to the next chamber.

>> There is a manhole on top of this chamber, to inspect and clean or replace the strainer.

>> The next compartment is the actual “hotwell” where the condensate water gets stored and the boiler water feed pump takes suction from.

>> The word “Well” originates from this compartment because olden days!! the hotwell used to be of 2 compartments one of which used to be a open tank on top, where all condensate return, then gets filtered using natural filtration materials such as stones, coarse sand, pebbles etc.

>> The filtered water from the open tank on top drains through filtering materials down into a ‘Well’ like tank below from where the water was taken to fill the boiler.

>> Since clean condensate may not have any oil contamination, it is allowed to be drained straight into the hotwell.

>> To remove dissolved oxygen from the water the hotwell temperature has to be maintained above 85oC. At this temperature the Dissolved oxygen saturation is very low, hence use of oxygen scavenger chemical consumption is highly reduced.

How to increase hotwell temperature?

>> By the hot condensate (by passing the condenser).

>> The clean condensate is usually condensed as water using an atmospheric condenser or drain cooler which is cooled by fresh water. Mostly in cargo ships, i have see atmospheric condenser however in large passenger vessels drains cooler is used, the cooling medium used here is the LT fresh cooling water system.

>> Hotwell Boiler feedwater cascade tank level is automatically maintained using a automatic filling valve which is controlled by float switches. the float switches read the water level and control opening / closing of the valve. A PID controller is used where the steam demand is very high such as Oil tanker and cruise ships.

>> There is also a provision for manual filling of hotwell. This is provided to fill the hotwell if the hotwell level is dangerously low and the supply through automatic filling is inadequate or auto filling system malfunctioning.

As i mentioned earlier these are my year long learning by entering the hotwell myself and by talking to shipyard engineers. If you have additional information or correction please do so, i am always happy to correct myself and learn new things! Hope this helps.